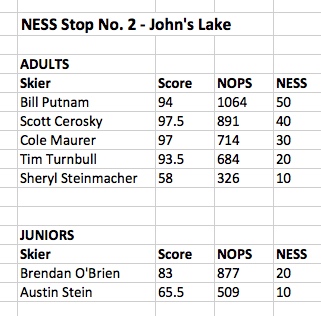 Brendan O’Brien and Bill Putnam won the Junior and Adult divisions, respectively, at the second stop of the 2019 Northeast Slalom Series last weekend at John’s Lake.

The third stop of the series, next weekend’s Pre-Regionals at Avon, will offer a big pot of NESS points to skiers as it is expected to be the second-largest field of the year, behind the Regionals later this month.

For the full NESS schedule or to register for the series, visit waterskitheeast.com.