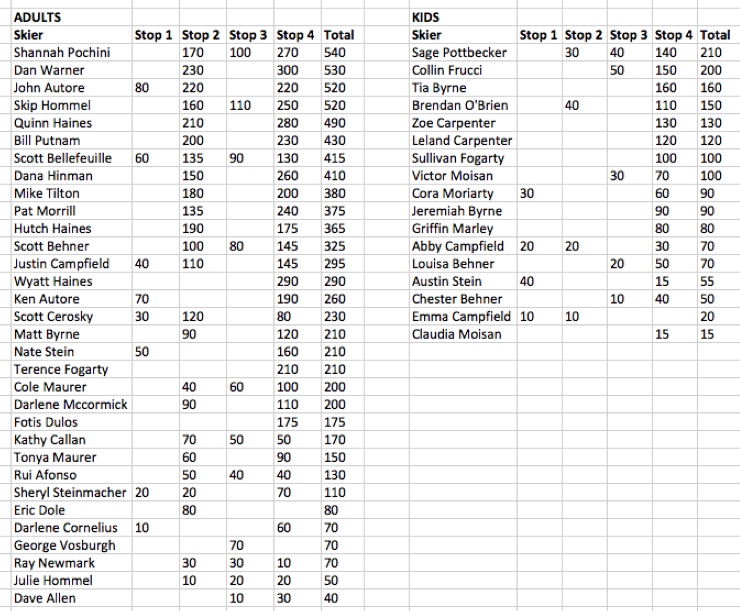 With only two stops remaining in the Northeast Slalom Series before the Sept. 1, head-to-head finals at Pangea, the final field of competitors is starting to take shape.

Dan Warner topped the entire field of 30 adult NESS competitors at the 2018 Eastern Regionals (see results here) to earn a whopping 300 NESS points and move himself into second place in the season standings behind front runner Shannah Pochini, who herself earned 270 NESS points at Regionals.

On the kids’ side, Tia Byrne made her only NESS tournament so far in 2018 count by topping the Regionals field to earn 160 points. Those points alone vault her into third place on the season, with Sage Pottbecker maintaining her perch atop the season points list and Collin Frucci sliding into second. A tough fight for the fourth-and-final NESS Finals spot is developing between Brendan O’Brien (150 points) and the sister-brother duo of Zoe (130 points) and Leland (120 points) Carpenter.

The final two regular NESS stops of the year are the Dubes Pond Classic XXIX (Aug. 18)  and the Tom Costello Alan Rossi VT State Championships (Aug. 25).  At the conclusion of the series, the top 12 adults and four juniors will qualify for the head-to-head series championships at Pangaea. Adults will square off for a cash-prize pool, while kids will compete for trophies.