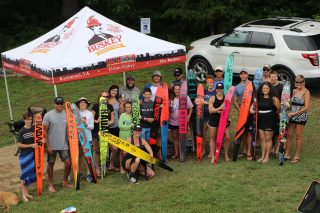 This Spring I was fortunate to be part of one of the best grass roots tournaments ever!

Roughly 120 water skiers and cider enthusiasts gathered on a Saturday in Bumpass, VA for the second annual “Buskey Cider Cup.” The event features an 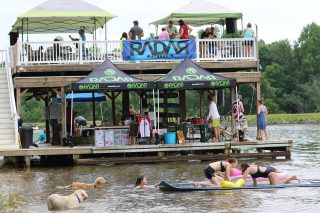 all levels, all ages, all for fun water ski tournament, surrounded by a festival atmosphere. While skiers were giving their best performance on the water, spectators enjoyed swimming, lounging, merchandise shopping, a cash prize cornhole tournament and delicious Buskey Cider. As the sun was setting and the skiing finished for the day, Midlife Crisis, a Charlottesville based band kept the lively members of the crowd on their feet, while others kicked back around a lakeside bonfire. The cider continued to flow until the event concluded at midnight.

Not only was the event a great way for families and friends to enjoy a summer day at the lake, it also supported a good cause. Lake of the Woods Adaptive 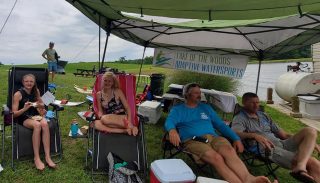 Foundation is the event’s third partner, along with Peace, Love & Waterskiing and Buskey Cider.
“LOWAF” is based out of Locust Grove, VA and is passionate about providing access and teaching waterskiing to individuals with disabilities. This year’s event generated over $1,300 for adaptive skiers and featured two skiers who have come through LOWAF’s training program.  The whole crowd was on its feet and fully focused on the water when it came time for the adaptive skiers to take to the water. The roar of the crowd, as the adaptive skiers went by was like a plane flying over and the performances by John O’Toole and Dan Muldoon were so inspiring they brought tears to some spectators. 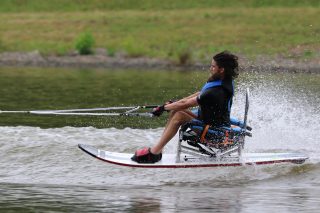 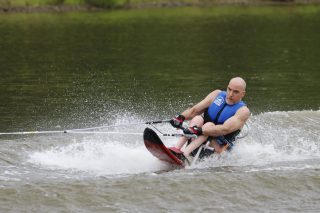 It was no doubt, one of the most special moments to ever take place on the water at the Bum Pass Water Ski Club.
Corey Vaughn, pro skier and owner of the ski club, skied last and caused tears of
laughter by skiing in a speedo and traditional orange life preserver. 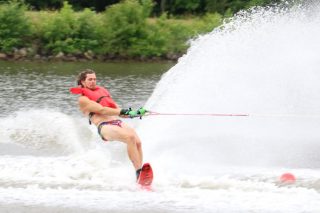 Despite the silly costume he still managed to ski one of the top slalom scores recorded anywhere in the world this year.
After Corey dried off, the band took a short break for the raffle drawing and awards ceremony. Six awards were given for the following categories: 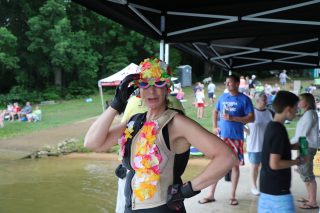 Corey and Amelia Vaughn, the event’s primary hosts, feel that this year’s event

couldn’t have gone any better. However, they have plans to grow the event and
continue learning and making improvements each year. If a hot summer day at the lake full of Peace, Love & Waterskiing, as well as a family friendly atmosphere, cold cider, live music and a bonfire is something that you would enjoy. Keep The Buskey Cider Cup on your Radar screen when it returns next year in early June.

Check out more pictures from the event HERE, or search #buskeycidercup