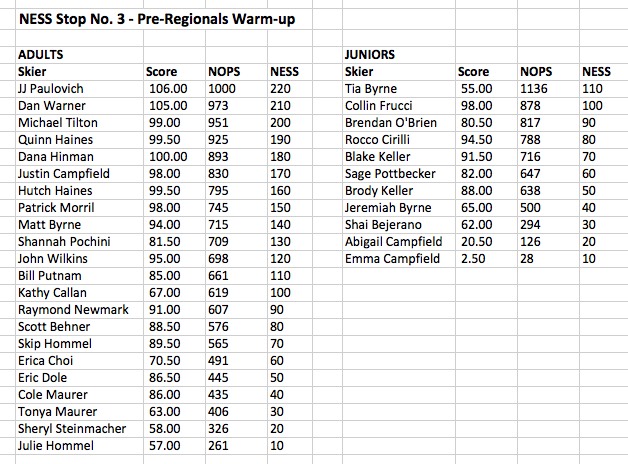 With a field of 22 adult skiers, the third stop of the 2019 Northeast Slalom Series offered up a pile of points, which J.J. Paulovich used to expand his lead in the season standings. J.J. scored 4 buoys at 38-feet off at the Pre-Regionals Warmup in Avon, CT, to tally an even 1,000 NOPS points, enough to win the third stop and add 220 points to his season total. Dan Warner, who was in second place coming into Avon, also finished second at the stop to maintain his ranking. Dana Hinman, Justin Campfield and Shannah Pochini currently occupy spots 3-5 in the season rankings, respectively. In the Junior ranks, Tia Byrne made her 2019 NESS debut count by topping the field and earning 110 NESS points, enough to put her in second place on the season behind the leader Brendan O’Brien. NESS stop No. 4 will take place July 21st at the Russ Cole Massachusetts State Championships in Oakham, Mass., with Regionals the following week at Avon serving as stop No. 5. For more information about NESS, including schedule and standings, visit www.waterskitheeast.com.